SHELTIES MAKE THEIR OWN FUN

I had the dogs out for a little while before their supper time. I went out to the dog yard and I did not see Walter.  I immediately thought that he somehow managed to get out. But the snow was not high enough for an escape over the fence. I noticed that the others all seemed to be looking up. In my dog yard I have a lean to type of roof coming off the house which provides  shelter from the weather and from the sun. I looked up to and there was Walter up on the roof. The snow was starting to melt and slide off. Walter was having a blast, he was sliding off the roof and then running back up onto the roof and sliding off again. There is a dog house just below the bottom edge of the roof. It had several inches of snow on it, just enough to make a nice step up to the roof. I don't know what possessed him to even think to do that. But I watched him slide down and climb back up and slide down again. I guess a three year old Sheltie is just like a kid. I had my phone to snap a picture but so taken with what Walter was doing that I did not get a photo. This boy loves to learn new things. He loves to do a high five, with both feet. Time to get started training him for his novice trick title. I know that he would love it and it would be good for him to be learning. That sure made my day. Who says Shelties don't think have not met Walter. 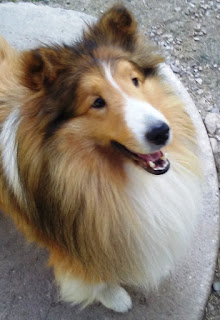