I have been so busy with the puppies I did not realize how much time has gone by since I have written any thing. The pups are graduating to baby cereal and soon to mushy puppy food. They grow so fast. They are starting to cut teeth and the moms are not too thrilled with that. Topaz is a much better mom this time than when she had her first litter and it seems as the pups get older the more concerned a mother she becomes. Other than needing to to out in the middle of the night every night she has been good.We have that as a new routine and it sure affects your sleep.
I have decided at this point to not have visitors to see the pups. They are still young and I want everyone safe including my self. I need to stay well in order to care for all these pups and adults that I have here. I stocked up on food so am good for about three weeks. I have plenty of dog food and puppy food.
Very strange and scary world for sure.  The pups are developing personalities now, little bit by bit. They respond to my voice and are starting to wag their tails. The large girl in Topaz's litter really has a great tail wag, as soon as I talk to her it starts. They will be 4 weeks this weekend so only 4 more weeks they will be ready for their new homes.
Hopefully things will not be quite so crazy in four more weeks. I will continue to take as many photos as I can, it is not easy to get good shots alone but I am doing the best that I can.
Hope you are all careful and stay well. All for now! 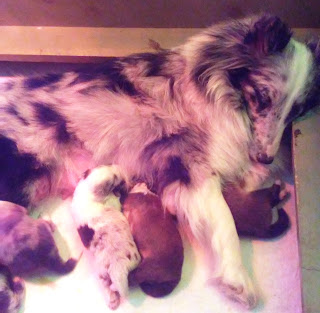 A busy time for sure. Topaz and Bonnie had their pups three days a part. So both litters are now 1 week 4 days and one week one day. Thankfully there were a few days between. Not much time for rest the past couple of weeks, up several times during the night to check on the girls. Topaz went into labor during the night and the first pup was born about 7:30 in the morning. It was an easy whelping which I was very happy with.
Bonnie started her labor on Saturday night and started delivery about noon time.Unfortunately this puppy was stuck, he was a big boy and breech. It took us awhile to work him out and it was rough for Bonnie. Finally he came into this world and was still living, we were not sure if he would make that birth. But he is just fine. Big and beautiful.
So Topaz has 2 boys and 2 girls, all sables, their eyes just opened today. Bonnie gave us 7 beautiful pups, such a surprise as she is such a little girl. She has 2 sable girls, 2 blue girls and 3 sable merle boys. Quite the rainbow.
I spend a lot of time with Topaz and her babies, she is not thrilled with motherhood. She takes care of her babies but with much persuasion. I do not believe that she will have pups again. She just wants to be with me and be a pet, she is always at my feet. So some thought to her future.  But not until she has raised and litter and after much thinking about what is best for her.
Bonnie developed diarrhea so I put her on baby rice cereal with boiled chicken  and yogurt and she loves this. Also got some really good pre and pro biotics from the vet to get her cleared up as quickly as possible.She and the pups are doing well and the diarrhea is subsiding thankfully, as there is enough drain on her with 7 nursing pups.
I still get up at night to check on the girls and the pups. Topaz's babies are getting on their feet already, not even two weeks yet and their eyes are open, so cute to welcome them to the world. Their ears are still closed and will soon open and watching them hear things is really precious. It is amazing the difference in development that three days make.
I am exhausted from all the lack of sleep, so try to get an hour nap in the afternoon.
That helps some.Once the pups are a little more mobile I won't worry so much.
I know it has been a couple of weeks since I wrote anything so wanted to announce the birth of the pups.
Will post pictures as they grow.
By the way I have lovely homes for all the pups.

Posted by Josephine Abrahamson at Tuesday, March 03, 2020 No comments: